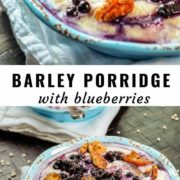 Barley porridge with blueberries is a tasty and wholesome breakfast topped with nutrient rich berries, walnuts, dates and a drizzle of honey. This is sure to give you a healthy and happy start to take on the challenges of the day!!

This barley porridge is inspired by Talbina, a whole grain porridge of middle eastern origin that is prepared with ground barley, milk and honey. In the recipe here I have further added roasted blueberries, walnuts and dates.

Is Barley Good for Health?

Barley has several nutritional benefits. It is rich in Beta Glucan, the same fiber that is in oats. Beta Glucan is well known for its cholesterol lowering effect. It is very beneficial for intestinal health. It provides bulk for regularity and facilitates the production of short chain fatty acids that maintain a healthy colon.

When consumed regularly as part of a healthy diet, it can be protective against heart ailments, cancers, diabetes and such. Barley has been shown to promote better blood sugar control and insulin response.

And I cannot say enough about the antioxidant rich blueberries and walnuts, that are an excellent source of omega-s fatty acids, phytonutrients, antioxidants and known for anti-inflammatory potential.

This porridge is so satiating and filling. Therefore it can be effectively included in a weight loss regimen, keeping honey to a minimum. Actually the blueberries, milk and small amount of dates are all sweet enough.

Barley porridge is a great alternative to oatmeal and works very well as a hearty breakfast. For more nutrition information about barley check out this post on Persian Creamy Barley Soup. 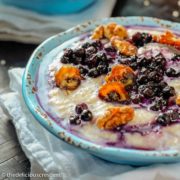 Barley porridge with blueberries is a tasty and wholesome breakfast topped with nutrient rich berries, walnuts, dates and a drizzle of honey. This is sure to give you a healthy and happy start to take on the challenges of the day!!
Prep Time10 mins
Cook Time15 mins
Total Time25 mins
Print Save for Later Saved!
Course :Breakfast
Cuisine :Middle Eastern
Servings: 1 bowl of porridge
Calories: 393kcal
Author: Roxana Begum

This post was first published on 4th January, 2016 and has been updated.