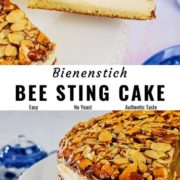 This Beinenstich or Bee Sting Cake is an easier version of the German dessert with soft cake layers filled with decadent vanilla pudding and with a fabulous crunchy almond-honey caramelized topping. Fancy and easy, this is one show stopping cake!

This cake is great with coffee or tea, like our other German desserts - Linzer Torte and Apple Cake.

One of the most popular German specialty cakes, the classic Beinenstich is made with a rich yeast dough. The easier recipes for this cake do not have the same caramelized almond topping — which is really the crowning glory of this cake. And those recipes also use a very rich cream filling, unlike the comforting vanilla custard filling of the classic version.

Although the original yeasted cake is an option, it takes more time to make. Also, yeast based cakes or breads dry up sooner, especially in the refrigerator. But bee sting cake with a custard filling definitely needs to be in the fridge. And I wanted to have a cake that will last a while.

After some trials, here is my Bienenstich with no yeast, for you to try.

You could use corn starch and vanilla instead of pudding powder.

How to Make it

Below is a brief overview of the process. Full recipe at the end of blog post.

I have not tried the following variations. Just a few suggestions you could try, making sure to adjust the quantities.

How to Serve the Cake

Although it makes a pretty presentation to serve it in the usual way, with the almond topping facing up, it is a lot more easier to eat it with a fork if the cake slice is served on it’s side. 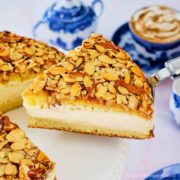