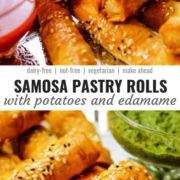 Samosa is the quintessential Indian snack that dots the lavish tables of the opulent banquet halls, trendy restaurants and all the way to the street vendor stalls of India. I grew up making samosas from scratch, the dough included.

But when you want to have this tasty snack more often, then you have to create a lighter and easier version. And importantly something that is handy enough to satisfy your craving when you need it - meaning that which freezes well.

Nowadays there are a variety of readymade dough available to make these delectable savory pastries. Many of them work the best when they are deep fried. I wanted to try a baked version using phyllo dough, which also gives it a delicate crispiness. And to add some novelty, I shaped it in a handy cylindrical form.

The traditional and popular version of samosa usually comes with a potato filling. Here I added some edamame which boosted the protein and nutrient profile. Also these beans have a green pea like bite, so they add a nice textural aspect.

Edamame are the young beans harvested before they harden into the more mature soybeans. They are low in calories, high in protein and fiber. And a good source of iron, calcium, folic acid, vitamin K and vitamin C.

They have a complete protein that provide all the essential amino acids required in the diet. These young beans are high in polyunsaturated fat and especially in omega-3 fatty acids.

Studies have shown that edamame consumption may be linked to a lower risk of age related mental disorders. Since the beans are lower in cholesterol, high in fiber and good quality protein, they are also associated with a reduced risk of atherosclerois and hypertension.

The phytoestrogens in edamame, known as isoflavones, have been suggested to lessen the risk of osteoporosis, improve the regulation of blood sugar, prevention of migraine headaches and even mitigation of PMS symptoms. In particular, the antioxidant properties of the isoflavone - genistein may inhibit the growth of cancer cells.

These Crispy Potato Edamame Cigar Samosas freeze very well. So you can prepare a big batch, freeze and bake them as needed. And what more do you need, when they spring back to their crispy originality when you lightly bake the leftovers that have softened a bit in the refrigerator. 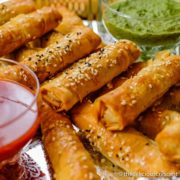