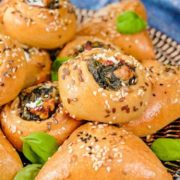 Fatayer with Swiss chard and feta cheese are healthy and so scrumptious. A nice handy snack to reach out to, anywhere and anytime of the day. Provides good amount of healthy fats, fiber and potassium.

Fatayer are middle eastern hand pies popular in the Levantine region and certain Arab countries. They are often made in a triangular or pyramid shape but also in some other forms and shapes.

The filling can range from meat, cheese, spinach etc. These pies are easy to make, store and are freezer friendly. And a great option for picnics and short road trips.

These middle eastern Swiss chard pies are pretty nutritious. With a filling that includes the nutrient dense Swiss chard, antioxidant rich leeks, feta cheese (a healthier cheese), omega-3 rich walnuts and flaxseeds; all wrapped in a dough that has more whole grain and then topped with nutrient rich seeds.

Swiss chard packs an amazing bevy of nutrients. It is an exceptional source of vitamin K which is good for bone health. In addition to that, it is a good source of vitamin A, vitamin C, fiber, calcium, magnesium and potassium.

Also, swiss Chard has high levels of nitrates, which helps with lowering of blood pressure, inhibition of platelet aggregation and improvement of endothelial dysfunction.

These greens are a great source of antioxidants - carotenoids such as beta-carotene, lutein, and zeaxanthin which are beneficial for eye health, and flavonoids like quercetin and kaempferol which have anti-inflammatory properties.

The aforementioned nutrients along with the chlorophyll content, make Swiss chard a great option to include in your food arsenal for cancer prevention. 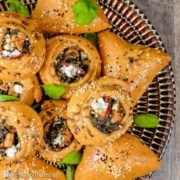