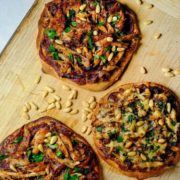 Musakhan is sometimes referred to as a national dish of Palestine. It is simple, comforting, uses few ingredients, yet complex and captivating in taste.

There are different ways to prepare this dish. But I have made some adaptations, retaining the overall flavor profile of this dish.

For the sumac chicken flatbread recipe below, I had baked some mini musakhan flatbread at home. I have enhanced the nutrition of the homemade bread by adding wheat bran and flaxseed meal to the dough. However, you can use store bought flatbread to make this recipe.

I thoroughly enjoyed preparing and eating this sumac chicken caramelized onion flatbread. And now it is a greater pleasure to be able to discuss about its nutrition value and share it.

Here I will discuss about two ingredients - onions and sumac - both known for their versatility, flavor and nutrition value. I have previously discussed about pine nuts in my post - Tabbouleh salad with pine nuts.

Sumac is a spice that is popular in the middle-eastern cuisine. It is a coarse powder made by grinding the reddish purple berries produced by the sumac bush.

This versatile spice adds bright color and a tangy lemony flavor. And it is used to flavor a variety of dishes such as - dips, salads, rice, kebabs, stews, breads and much more.

Studies have shown that sumac berries have exceptional antioxidant properties that are attributed to the phytochemicals present in the berries.

One study that looked at various commonly used eastern spices, concluded that of all the spices studied, sumac had the highest antioxidant activity, the highest concentration of total phenolic compounds and the strongest antibacterial activity.

Onions are versatile and used to flavor dishes across the world. They are part of the allium family of vegetables that include garlic, leeks, chives and green onions. These vegetables have been studied extensively and have particularly shown promise with stomach and colorectal cancers. I have previously discussed about leeks in my post about Moroccan style poached eggs.

Onions are low in calories, high in vitamin C, and a good source of fiber, vitamin B 6, manganese, and quercetin - a potent antioxidant.

They are rich in flavonoids and organosulfur compounds which have been attributed to a range of health effects. Those include anticarcinogenic properties, antiplatelet activity, antithrombotic activity, antiasthmatic and antibiotic effects.

Make sure to peel as little of the outer layers as possible, because the flavonoids are particularly concentrated there. 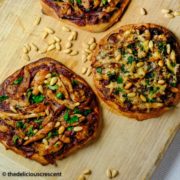