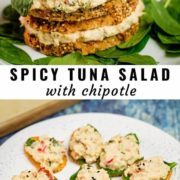 Spicy tuna salad with chipotle may be the tastiest and trendy way to have tuna. Nothing beats that smoky flavor! Enjoy it in sandwiches, wraps, on crackers, tuna melts and more.

I also like to use tuna for making Tuna Melt Crescent Ring or even Spicy Fish Cakes.

There may be a zillion ways to make tuna salad. But this one is packed with flavor. The special ingredient here are the chipotle peppers, which adds an incredible smoky flavor to the creamy tuna salad. There are several other ingredients that enhance the flavor profile even further.

Chipotle peppers are popularly used in Mexican and southwestern cuisine. They are basically ripe jalapeños that are smoke dried. And most commonly available canned in adobo sauce.

What Do You Need

Tuna: Try to get a gourmet brand, as the processing usually aims to preserve flavor and nutrients. And packed in water is better. But if you have tuna in oil, make sure to drain the oil pretty well.

Mayo: This is a classic ingredient for tuna salad. Try avocado oil or olive oil based.

Greek Yogurt: I used Greek yogurt to lighten up the salad. You can use all mayo if you want the full traditional creamy texture.

Red onion: Some chopped red onion for flavor and texture.

Garlic: Some grated garlic for flavor.

Lime Zest: You can use lemon zest too.

How to Make It

Tuna is a great source of omega 3 fatty acids, protein, vitamin D and selenium. It is low in saturated fat content and provides high quality protein.

This oily fish is especially well known for its content of long chain omega-3 fatty acids that are associated with reduced risk of heart disease, better brain function and support of normal growth and development.

But watch out for the mercury content in tuna. Albacore tuna has better flavor but three times more mercury than the light skipjack tuna. However, these can be had in moderation. Learn more about the suggested amounts for tuna.

How to Serve Tuna Salad

Sandwiches: Serve it sandwiched between whole grain or rye bread. You may use salad greens, tomatoes, cucumbers, pickles, sprouts, or boiled egg slices with the salad.

Tuna Melt: Place a slice of cheese and tuna salad between bread slices and grill, brushing some oil or butter on the outside.

Crackers: Line the crackers with baby spinach and top with a dollop of tuna salad and sprinkle of toasted sesame, pumpkin or sunflower seeds. A sprinkle of black seeds especially adds an eastern flavor dimension.

Stuffed Veggies: Use hollowed out small and firm tomatoes, avocados, mushrooms, cucumbers or sweet peppers to stuff with tuna salad.

It is already gluten free, nut free and soy free.

Tips and Notes for Tuna Salad 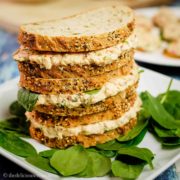