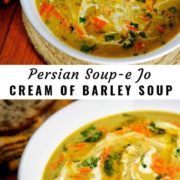 Persian cream of barley soup is a delicious warm bowl of comfort. So easy, nutritious, bursting in taste and flavor, light in carbs and vegetarian.

This creamy barley soup is just one of the many amazing classic Persian soups and it is also known as Soup-e Jo. And "Jo" means "barley". It is so perfectly balanced in taste and nutrition. No wonder that it is so popular.

I have used pearl barley for this recipe. But if you have access to hulled barley and would like to use it, just make sure to cook the soup longer until the barley is well done.

When I cook this soup, I use either leeks or mushrooms or both. Remember that when using only mushrooms, the soup will have a darker color due to the mushrooms. But the flavor is still awesome. You could also cook the soup with the leeks and add some sauteed mushrooms at the end of the cooking process.

I just love barley. I think that it does not get as much attention as it should. It is a super nutritious grain. Barley can also be used to create interesting textures and consistencies in recipes.

It is excellent for adding creaminess and body to soups, stews, puddings, gravies, desserts, alongside enriching it; unlike refined flour or corn starch that only add to the consistency of a recipe but are nutritionally inferior.

Just like oats, it is a great source of beta glucans - the fiber that is well known for its cholesterol lowering effect. But the barley grain has overall more fiber than oats.

And the interesting thing is that, unlike many other grains, the fiber is present throughout the grain and not just in the bran/outer layer. I have written a lot more about barley in this post on Barley Porridge with Blueberries.

This soup uses other ingredients that enrich it further with both flavor and nutrition - leeks, carrots, celery etc. Leeks are another favorite of mine - so tasty and healthy! Yet another super yummy recipe using leeks - Creamy leek avocado cilantro soup.

This tasty and healthy Persian Creamy Barley Soup is a keeper for the comfort and nourishment of your loved ones!! 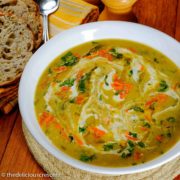