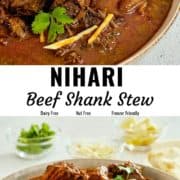 Nihari is a hearty beef stew with large chunks of tender fall-apart beef shanks in a silky and mouth watering gravy. This authentic recipe from the Indian subcontinent is so easy and includes slow cooker instructions and tips to lighten it up.

Nihari is a popular stew from the Indian subcontinent, that is made with shank meat and bones. This delicacy with its roots in the Mughlai cuisine of Old Delhi and Awadh, is especially common in North India, Pakistan and parts of India with a larger Muslim population.

Traditionally, braised shanks were slow-cooked overnight with bones, onions and spices, turning it into a breakfast feast by morning. The meat is meltingly soft, falling apart into the rich and silky gravy. It is then devoured with fresh baked naan, khameeri roti or phulka.

Nalli nihari is a delicacy that is cooked with bones, and the marrow is scooped out and added back to the stew, making it richer. Although enjoyed year round, nihari can be a real treat in winter time. You can say that this braised beef shanks stew recipe is the Osso Buco of the orient!

Large chunks of fall-off-the bone tender beef shanks in a silky rich gravy is a sure keeper. One of the easiest delicacies ever!

What Meat to Use?

Do verify that it is shank meat, cut in large pieces, to get that famous texture and taste.

How to Make Nihari

**Below is a brief overview. Full nihari recipe is at the end of post.

Step 3: Add bones and bring it to a boil. Lower the heat and simmer until meat is almost done. Make a thin flour paste and add it gradually while stirring stew. Simmer nihari until meat is fall-apart tender and oil trickles to the top.

As the meat cooks slowly for a long time, the collagen in the connective tissue breaks down, dissolving into the gravy giving it that thick, smooth and silky consistency.

Step 4: Discard bones and bay leaves. Serve hot, topped with ginger and cilantro. Sliced green chilies and lemon wedges on the side.

Nihari is one of the best recipes to make in a slow cooker. It will turn out perfect. Collagen break down needs times, which slow cooking allows. Slow cooker instructions in recipe card notes below.

Can I use Garam Masala?

No, garam masala will not work for this nihari recipe. You will need the special spice blend to get that ultimate taste.

How to Serve Nihari?

Beef nihari is fantastic with fresh baked naan, khameeri roti or phulka, to soak up the gravy. Try it with hearty whole wheat naan or easy skillet flatbreads. Add some fresh salads or side dishes - salad shirazi, aloo gobi.

Plating nihari properly is important. Arrange the large chunks of meat in a wide serving dish and then pour some gravy around it. Make sure that the meat chunks are visible. Drizzle stew oil on top.

Garnish with fresh julienned ginger and cilantro. Serve sliced green chilies and lemon wedges on the side, to be used as per taste. You can top with some fried onions too.

Leftovers can be stored for 4 to 5 days in the refrigerator. This stew is very freezer friendly. Make a lot of it, portion it in Tupperware and freeze it for later. Thaw and reheat on stove top. Add some water to adjust consistency while reheating.

Nihari tastes even better the next day!

This stew does use quiet a bit of oil for its preparation. But much of the oil will surface on the top of the cooked gravy. Spoon off the oil and enjoy the beef stew. It is still going to be very tasty. You don’t need layers of oil on the top for a great Nihari.

This is an egg free, soy free, dairy free and nut free stew. Make it gluten free by replacing durum wheat flour with rice flour, chickpea flour or a combination of these as suggested under “Ingredients” above.

Beef is an excellent source of high quality protein, some B vitamins (Niacin, B12, B6), zinc, phosphorus, selenium, and is also a good source of iron.

I would recommend choosing grass fed beef as it is a better source of CLA (conjugated linoleic acid) and omega-3 fats. And also for many other healthy benefits.

However, include red meat only in moderate amounts in your diet. And you may opt for chicken for an equally delectable Nihari. 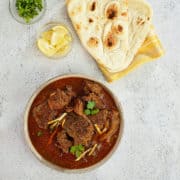 This post was first published on January 31, 2021 and has been updated with video, process photos, recipe formatting, tips, and additional enhancements.